It’s one of those horror story situations… 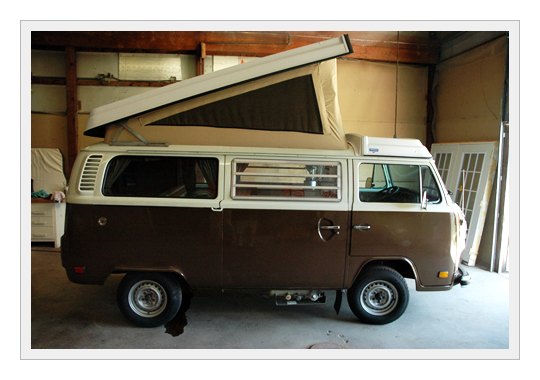 In corner A we have Mike, who has two 79 Westy buses, one with a good 2.0 liter engine, but a so so body, the other; a mint condition Champagne edition, with a crappy 1.8 liter engine with no tin or compression.

Compensation: The other 79 Westy with a 1.8 liter engine in it, si 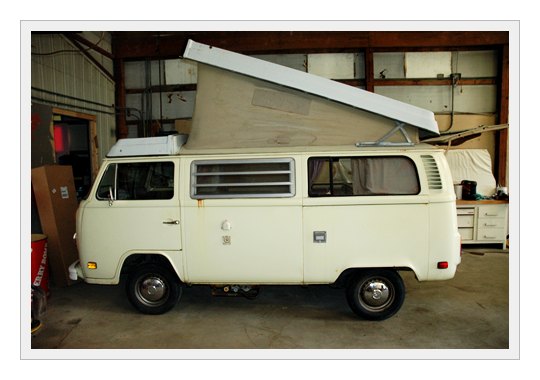 The Cast: Mike; The nice guy with a desire to get his bus on the road. Nameless X; The buddy who has been wanting a bus for a while now, and has “skills”. Sage; The idealistic jump before you look champion from 2005 – 2008 consecutively.

The stage: We have excellent working conditions, an old mechanic’s shop with tools lighting and a concrete floor. 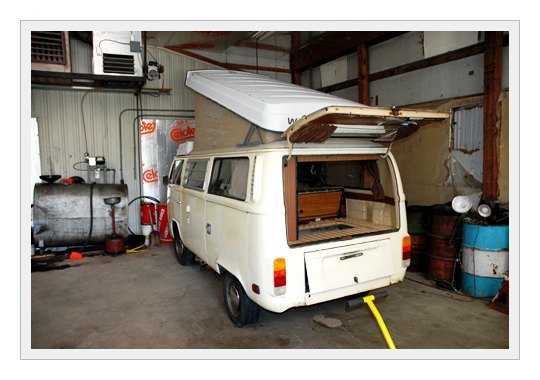 Thursday May 7, 2009 10:30am X and I arrive to look at the tasks. Seems straight forward. I have the tremendously valuable Engine Removal in 20 Steps by Ratwell.com ready to go. We review the steps and start in on the OK bus. The 20 steps in engine removal mostly entails the wires, and fuel lines and FI systems. The three last steps include the 4 engine to transmission bolts, and the rear bracket. 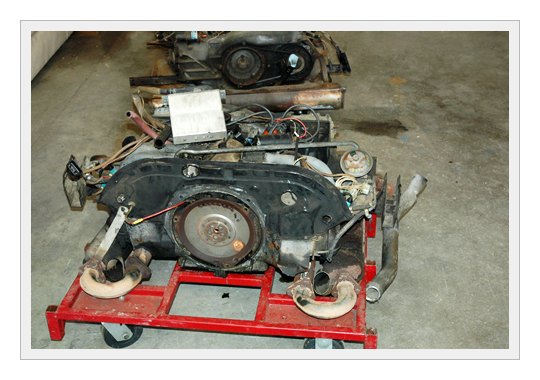 We are slow to start; finding the right tools, developing a rhythm and breaking the rusty nuts and bolts takes time. The rear cradle and engine support bar take forever. This is the point that swearing begins.

2:00pm Engine one is free and on a dolly. It is fairly rough looking, but it is free from the body. 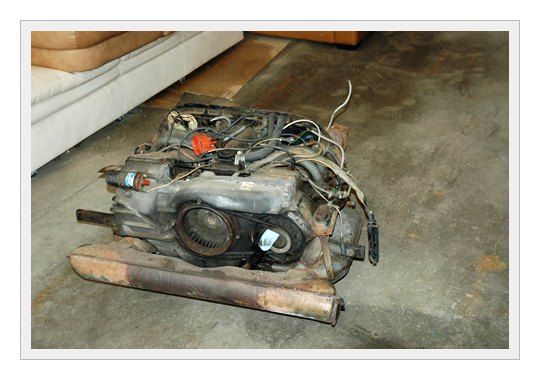 As we start on the second engine; the one in the really nice bus, we take care to make sure we are gentle and use plenty of towels so nothing gets scratched. We determine that we do not have enough clamps to close off the gas lines. X is tasked to acquire some from the local Menards. I go to work with steps 1 – 15 of the Ratwell guide. X returns as we approach the bolt removal steps. The only items left on the task sheet are the removal and clamping of the fuel lines, and the disconnect of the throttle linkage (which is vastly different from the manual version of the late bay bus).

I work on the driver side, since we are replacing all the fuel lines, I use the clamp and cut method of fuel line separation. My work is done, X is under the the bus taking forever to remove the fuel return line. More swearing, but to use such language in such a simple removal exercise is really unnecessary.

I am taking the moment in the entry to discuss safety. Since beginning this project, I have dented my car twice, had my trailer detach once, and had some minor bumps and bruises. No serious injuries have occurred. I wear safety glasses, face shield, work gloves and other things that keep me safe. Another safety tool I have is something that stops me mere moments before something really stupid happens. Call it one of the little voices in my head. I have never been to the ER thanks to a Volkswagen project.

At this moment, as I am napping, sorting tools and generally getting impatient with X’s inability to pull a rubber hose off a metal tube, when all of a sudden he dashes out from under the bus, starts swearing more violently, and rips off his safety glasses.

“Fuck” he summarizes “I have gas in my ear”

Immediately, he runs out of the building, and I quickly follow him. My first thought was man, he really knows how to yell. My second thought was to flush the gas out of his ear. We start with a series of flushes from my drink bottle, but this doesn’t seem to have too much effect; so much for Artesian Spring water. My third thought was that it was time to get him to the ER.

We get in his truck and race the 7 miles into Traverse City, all the while he is banging his leg up and down like the drummer in an eighties hair band. I can tell he has real pain, he has his head tilted sideways. Being thoughtful, I start yelling out landmarks along the way. If it doesn’t provide a sense of hope, it should provide a mild enough annoyance that he is distracted from his flaming ear.

Suddenly he picks up his phone and starts dialing. Now I know I enjoy a meager social life, if I wanted to call someone at 3 on a Wednesday, there isn’t anyone I would know to call. If I had gas in my ear making social calls wouldn’t be on the list of things to be doing.

“Doctor X please” pauses, while his foot keeps thumping the floor pan. “Hey, it’s X, I just got gas in my ear, and I am on the way to the ER” another pause “I’ll be there shortly”. This guy must visit the ER often. He has memorized the staff and phone numbers…

Traffic is heavy, but with a little weaving we arrive in an efficient manor. We get him checked in, I look like a complete freak, with grease and dirt just about everywhere. I help him with the little forms, and he is told to take a seat.

It then occurs to me that he hadn’t taken the time, while the gas was sizzling in his ear, to actually clamp the gas line. I immediately leave the hospital and head back to the work space, fully expecting to see large clouds of black smoke billowing into the sky from the general direction. There isn’t, and when I get back a slow but steady stream of gas is creating a pool on the floor in the shop. In the center of the vapor lake is the shop light.

When the immediacy of the situation comes to a close, I think to call Mrs. Sage to discuss the goings on. She of course already knows, and proceeds to lecture me about things I didn’t do.

X calls me about 4 O’clock. He wants to go back to work on the buses. I tell him that one visit to the ER per day is my limit, and that I will call back later. The doctor tells him to not smoke for a few days. Sage advice.

(More on the project later…)