I first became aware of Brian when I received an e-mail from him a few years ago.

Hey Sage, I noticed that you aren’t to far away from me, are you going to the Lansing show? Let me know, my phone number is (616) XXX-XXXX.

I get to Lansing, the show is lame, but I give him a call. He’s at the show. Brian M is pretty chatty, and I don’t know what to think of him the first time we meet. He has a collection of barndoor parts that he bought and he is pleased.

All VW’s after this are not consider as part of the vintage community because they have watercooled engines.

Barndoor owners are unique. They tend to have an ultimate respect for VW buses, because these vehicles are finicky, hard to find parts for and usually 3 – 5 times more expensive to purchase, even if they aren’t in good condition. To own one, you make a statement: “I am insane and have a lot of extra time”

Brian owns some of the oldest VW buses in the world. He loves the community very 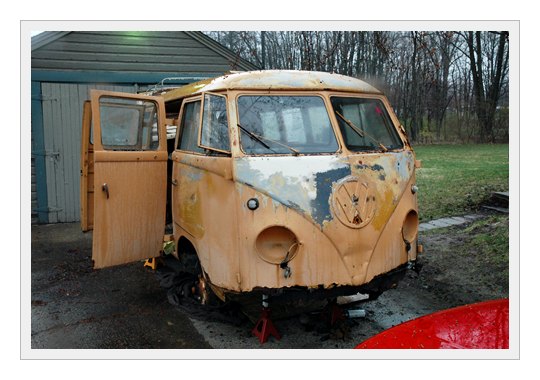 much, and knows more about Barndoors than just about anyone I have met (except the owner of TheSamba.com). I have been giving lip service to visiting him for a while now. On the way home from a recent road trip, I took the time to stop by.

Brian is single, and has a smaller well kept house in Holland Michigan. He greets me with a high energy smile. He’s about 6’2, and lanky, he talks fast. The first thing I notice is the Barndoor Ambulance in the driveway. He is working on it. At first glance, it is worse than my 23 project. The front has a lot of rust, the interior is stripped, there are dents and other things that often plague buses. 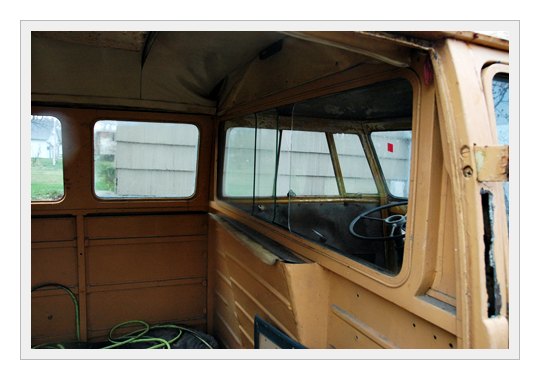 “This is the second oldest Ambulance that has been uncovered in the world” he says with a tone of pride. “I am getting it ready to drive to The Classic.”

The Classic is in Orange County California. That’s 2145 miles one way, if you take the direct route. This bus is hammered. I can’t imagine driving it 100 miles. Needless to say; Brian is hardcore.

He gives me the tour, talking about the over priced rear door he purchased in Japan, and some of the other parts he has to complete it. He will rebuild the engine and transmission 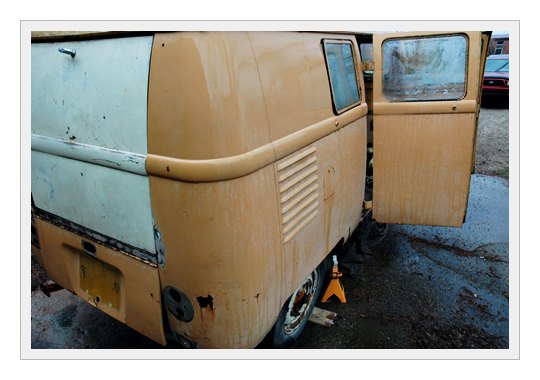 When he is done showing me the ambulance, he opens the doors to his simple single bay garage. This is when he gets really excited.

“This is the oldest known truck”

Single cabs were not part of the original bus plan for VW. The VW bus was designed as a simple to operate vehicle to carry cargo. It’s design is genius, because these small trucks can carry more cargo than many full sized vans or station wagons. It was the brain child of a Dutch VW Dealer who drew the original design on a napkin. With the engine in the rear, and you sitting up front, it creates a large area in the middle, and a well balanced ride. In 1948 an 1948 VW experimented with the Type 2 design, and they went into production in 1950.

The single cab pick up is something they started to dabble with in 1952, and Brian’s is likely the second oldest survivor. He shows me all the parts he has been pain painstakingly collecting over years that will go into rebuilding this truck. A “B” pillar, and floor pan, the pick bed. All of it original, all of it not cheap. 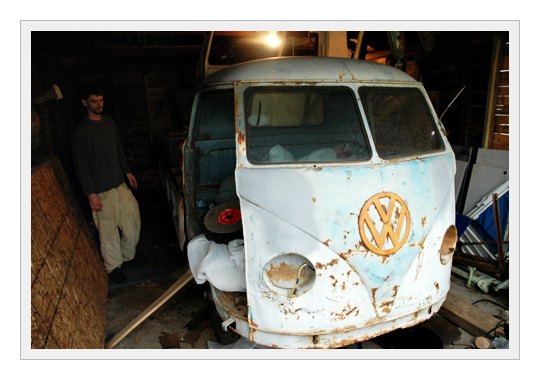 We get done looking at his collection of stuff here, then he adds that the rest of his collection is at his storage unit. It’s raining hard, and I am done with looking at the two buses he has here, I suggest that we go to the storage unit. It’s a 15 minute drive, and when we arrive, it looks a lot like my barn; filled with parts and unusual stuff that he plans to use for trading or to help out other owners in the future. He also is paying a decent price for the space. 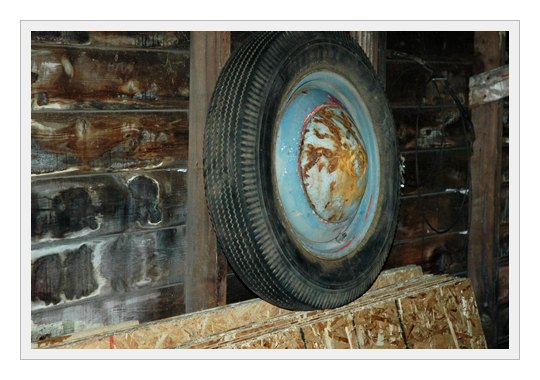 In here, he has a 52 logoed panel that he hopes to also put back together, plus one barndoor too wasted to restore, but it will be donated to getting the other three on the road.

It’s been a few good hours looking at the collection that many would covet, but few people in Michigan would understand. We have dinner and talk about Holland and how he managed to get to Holland Michigan. That’s another story for another blog.

I have been around vintage car collectors for a while. It is not unusual to see hundreds of thousands of dollars spent on a vintage car that is desirable. These are just like that. What makes the VW hobby so unique is that it is accessible to regular folks. Brian, one of the best collectors, is a machiner. He isn’t very wealthy, but he can be a major player. Most of the VW guys I have met are like this.

I don’t really want a Barndoor myself. To me my next project is all I really want…