In my previous post, I was complaining about going from a main seal replacement to a more robust renovation. Well… I am now $700 into the project, but the engine is in excellent condition.

Getting the bus back on the road was a bigger chore than I thought. 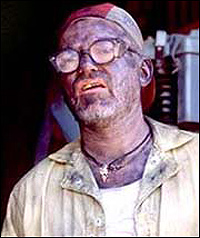 Challenge One: I assemble the long block. This required tracing all the threads on the block, and taping out 3 that had snapped off screws in them. For the most part, the long block went together well. I learned how to install cylinders on the rings, the wrist pins went in without much trouble, and I torqued everything down. It was later discovered that I have forgotten the tin that goes between the pushrod tubes and the cylinders. It took an extra 67 minutes to pull the heads and install those. We noticed that the push rods were really straining on the rockers. I had to move the rockers back quite a bit.

Challenge two: Building up from the long block to the complete engine was pretty easy, but we installed a few things out of order, so when it was time to put the intake and carb on, we realized that the generator should have been the last thing to place. It also took some extra time to paint the tin, and sandblast everything clean.

Challenge three: Engine installation. This was the hardest part. Mostly because we had to fabricate so much stuff. I had removed the metal spacers from between the case and cylinders, which made the exhaust off set by 4 mm. Now we are trying to drill out cast iron… We got the holes opened up enough so the silencer fit the exhaust holes on the heads.

According to Russ Wolfe the 1969 bus is one of the hardest VW’s to reinstall the engine. It uses the4 bolt system like all older buses, but because it has the newer transmission, it requires a crossbrace at the rear of the engine. This leaves about 4 inches in which you have to work to install the engine, so that you are above the engine mount ears on the bus, yet below the engine area deck so you don’t scrap the tin. It took use 90 minutes to get everything in. Then I start hooking up the engine. I discover that the accelerator cable is lodged between the transmission bell housing and the engine, that I just finished bolting together. AHHHHHH SHIT. It took two hours to undo and redo the engine from the transmission again.

What I have learned: I learned that I must spend a few hours making exactly sure of what parts I need and order them all a once. I have learned to know how the tin goes together before starting to rebuild the engine. I have learned that the accerlator cable likes to be a pain in the ass. I have learned that you triple the time you think it should take, then double that. You should also do this with the cost. I have no learned to walk away from VW’s, and to answer Hazet’s question to me, I have not yet learned whether I’m stupid or an idiot, but I am leaning toward idiot.