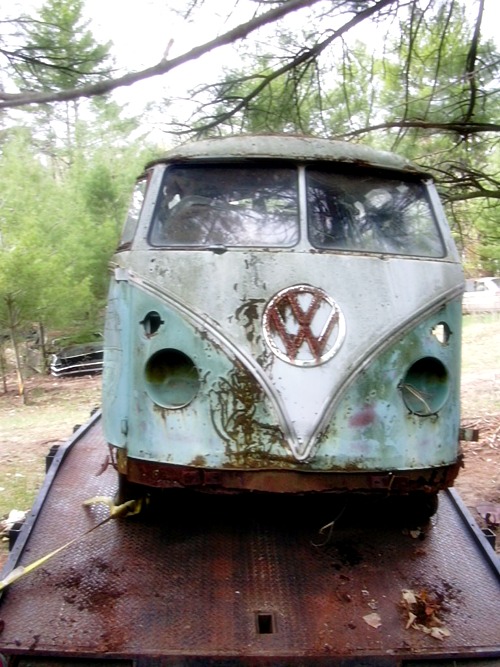 Any one who has ever wanted something has had to work for it…In my case getting it was the easy part, making it work is the hard part.
I work at a radio station, and I was talking to a jock about a bus that I had recently purchased and the guy look at me with a grin. Rod had already gone thru the 13 steps to rid his life of buses, but he is so much older and wiser. So he says

Immediately I asked where, and he gave me the name of the town and not much more.

“Oh” he adds “watch out, I didn’t mention that I was escorted off the guy’s property by a shotgun”

A few weeks pass, I have a slow day so I head out to find this place. I go to the township offices looking for the zone code enforcement officer. These are the blyte people. And they consider things like old buses, blyte.

“Ever seen any old VW’s”

I am sent on a goose chase. But I eventually end up buying 2 buses 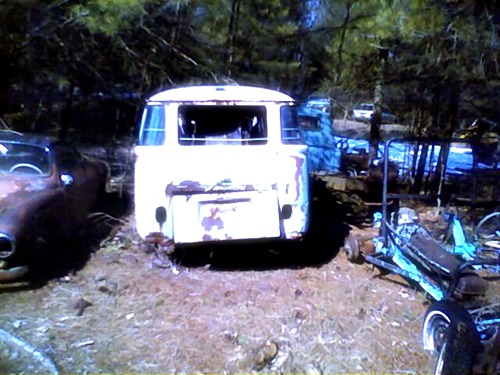 from that goose chase. So a month passes. I run into Rod at the station.

“Oh, you were on the wrong side of the highway”

I pull up a map and we were soon looking for the property. The next day I am out looking for the bus. I come up this old dirt road and on the right is an old pink concerete block shack. I look around, and behind the barn I spot a bug…

I pull in the driveway and start yelling. If I’m going to be shot at, it will be as I am driving out of the drive way.

I get out. No one is there. The door has a padlock on it. I start walking around behind the barn, and there are 6 bugs, a Type III, a 412, and 12 Corvairs, an old Chrylser, a Pinto, and a bunch of other crap.

There is a two track that goes up a hill, so I start walk, expecting to be shot at any moment. As I come up the hill I see more OG metal. It is the holy grail I was told about, but it’s 30 years too late. In all there were over 120 vehicles on that property, but I was only concerned about one… 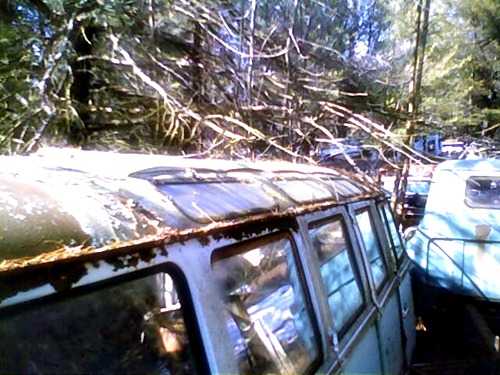 The next move was to determine how to get them.

Enter Ken Jr. Ken Foster was a grumpy old man who had died 4 months before I found the property. 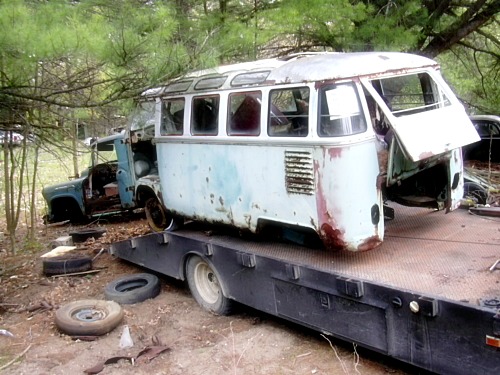 Ken Jr was the exector of the “estate”. Here’s a 50 somthing drunk who things the land and everything on it was worth gold.

I find Ken via some handy work and county records. He is reached through his attorney; a guy who easily works out of his second bedroom.

Here’s how the first call goes:

“Hello, is this Ken”

“My name is (The Sage) and I am calling about some of the cars on your dad’s property. What are you going to do with them.”

“How the hell did you find me?”

This was about 2 in the afternoon. I quickly learned that arranging early morning meetings meant strong liquor breath, but relative sobriety.

I began to explain my detective work to him and we warmed up. We agreed to meet at the property the following Saturday morning. He was open to “letting a few of them go”

I have been in sales over 15 years. I understand value is a subjective thing. If I think they are worthless but am willing to go as high as 25 bucks on each, and he thinks they are worth $100 but is willing to come down, we have an opportunity.

I look around, and realize that (to me) there is an opportunity to be a VW owner in a big way fast. I first start to discuss a few of the cars I really don’t want as a way to feel him out. I soon realized he had no interest in the VW’s and things got out of hand quickly. But the end of the morning, not only had I secured the 23, but also a parts bus, 2 ghias, 2 squarebacks, a 56 bug shell (which covered the total investment when I sold the clip the next spring), and two 60’s era bugs. I wrote a check, he signed the bills of sale.

I now owned 9 vw’s. Then I got greedy. I knew I could sell parts and make money. I knew there was some American steel worth serious dollar to the restoration guys.

I was being egged on by my body guy. He knew tons about 53 Buicks. These were sought after cars. These were highly prized even as junk. But we concluded that this 10 acres of junk must be work something more than scrap. So I did the really foolish thing:
I called Ken Jr back the next week.

“Ken, how about some of the other cars”

“No, they are going to the crusher, I already have a deal worked out.”

“How much is the steel going to be? I can beat it”

“You’ll have to also give the scrap hauler some money, or I won’t do the deal.”

Now I owned 22 fucking piles of shit. Hurray for me.

I have since learned about the entire arena of mental health that support the diagonsis known as “Delusions of grandure”.