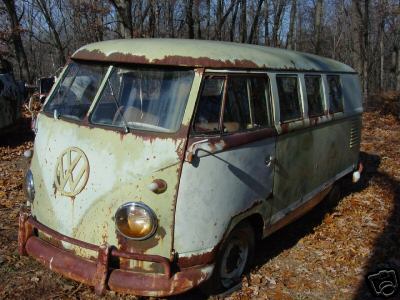 This is the second bus I even owned…This is what happens when you’re bored on a December afternoon when it’s too cold to go outside. I was surfing E-bay when I spoted this little gem…$832 later, it was mine.

Next step: Getting it home…I don’t own a trailer, or at least not yet…Friends with trailers are often a handy thing. In this case I got one..

So on a Sunday evening I head off to points past St Louis to get this bus. On the first night I end up in a crack hotel in inner St Louis. “No thanks, I’m not looking to a date just now…”

I arrive at the sellers location, and it’s quite a place. He and his son restores VW’s. He was a pretty cool guy, and it looks like he does good work. He recently sold a 23 window for $35,000. He has about the ideal situation: He has a personal campus; House, 6 car garage (which I would have loved to see what it housed) and a large office suite above the stalls. He took an old log cabin he found on his property and moved it into his yard. He uses it as a place to go to read. Finally, he has a well heated and powered 30 x 40 pole barn. I would love this set up.
Getting the bus onto my trailer was harder than originally thought. It rolled, but I didn’t bring a winch. The seller took a tractor and pushed it on, no damage. We finish our final business of titles and such. Then I’m off for home.

You never knew you had friends on the road until you tow a 1960 “Hippie Bus”. I have driven perhaps 1.3 million miles in my life, and I have yet to have as many gas station conversations than when I was towing that bus. An old coger reminessed about his days in the sixties, and it goes on…

The drive was slow and tiresome, but I made it home averaging 16 miles per gallon.

So here I am in January, with a bus. Now what? I put it at the storage lot I live near and figured I would wait until the spring to put it back together.
Two months later I hit the pay dirt and my plans changed. I “flipped” it for about twice what I paid for it to some fellas in Miami. Getting it to them was a pain and took 5 months. They paid in advance and it ended well.

Recently, they had it for sale for $4,500 after fixing the brakes and the engine.

This site uses Akismet to reduce spam. Learn how your comment data is processed.